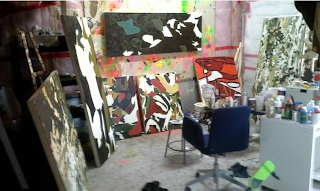 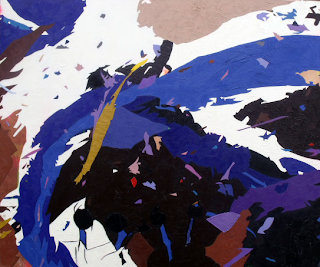 Even past meanings, that is, those born in the dialogue of past centuries, can never be stable (finalized, ended once and for all) – they will always change (be renewed) in the process of subsequent, future development of the dialogue…. Nothing is absolutely dead: every meaning will have its homecoming festival.¹

It happened here sixty years ago. English Canada’s contribution to abstraction was born in a Whitby cottage at the lake. A group known as the Painters Eleven formed in Alexandra Luke’s lake-front studio in 1953. Six decades later abstract painting has gained renewed attention. The regional associations with non-representational image making are at once celebrated and critically examined in Pete Smith: Initial Public Offering. Smith offers an innovative perspective through which we can plot abstraction’s path and where it may lead.

Pete Smith is an artist, critic and educator who now lives in Bowmanville. He has exhibited his work extensively since completing his BFA from York University in 1998 and his MFA from the University of Guelph in 2007. He lectures at Toronto’s OCAD U and in Durham College’s Fine Art and Design program. Smith has exhibited nationally and internationally. Initial Public Offering is the premiere public gallery exhibition of Smith’s work in the region the artist now calls home.

The artist offers a materially and sensorially-rich environment. Movement appears alongside stillness, the scent of oil paint mixes with remixed digital audio, the asperity of impasto paint on burlap inhabit the spaces next to smooth animated transitions. Smith’s past becomes our present and it all bows toward the artist’s future. In the context of Smith’s studio practice, tangible becomes digital, then circles back again into material form. The artist wonders: “how can I transform the ephemeral, digital image into a specific ‘thing’, into a physical object with compelling material attributes? How can I transform an image into a painting?”

Pete Smith’s solo exhibition follows a trajectory; the restless arc of the artist’s creative process. In the fall of 2010, the painter had reached an impasse. The artist’s working model seemed to have run its course after five years. Here was a stalemate in need of resolution. The solution lay in the past half decade of Smith’s studio output. He began experimenting with a computer animation program known as Flash to resolve the painter’s block. The artist switched output into input. Smith turned a half decade of studio output into raw digital material into an animation titled blind carbon copy (bcc). The computer program became a kind of digital mirror, reflecting the artist’s studio production back in unexpected, refreshed ways. A seemingly deadlocked predicament suddenly leaned into a myriad of infinite possibilities. This animation gave new form and content to a body of work now hanging at Station Gallery.

The concept of machine-generated cultural output emerges in George Orwell’s celebrated dystopian novel, Nineteen Eighty-Four. The novel’s protagonist, Winston Smith, is embedded in a mechanized society at war with free-spirited vision and imagination. Through Winston Smith’s eyes we see the “versificator,” a production-line machine that generates pulp novels, tabloid rags, even sentimental songs. Orwellian technology is not a tool, but rather an instrument designed for efficacy in ridding human creativity. In Orwell’s imagined late twentieth century, Winston Smith is a writer hopelessly oppressed by technological advancements. Fast forward to the realities of the early twenty-first century—Pete Smith is a painter liberated by technology’s creative potential.

Smith fittingly describes blind carbon copy as an “abstract painting image making machine.” As mentioned earlier, the animation sources five years of visual information ranging from sketches, graffiti, doodles and other graphical forms. blind carbon copy is a dynamic collage with the vertiginous sweep of a psychedelic Rorschach test. Some signs can be identified, such as the reversed “C” of Coca Cola’s Spencerian font or a single Mobius loop arrow. An emphatic declaration “We Are Alive” resurfaces several times throughout the animation. The statement is appropriated text from a graffiti tag in London, Ontario. The artist chose these words for a site-specific painting directly on the gallery wall. Other moments remain unidentified, abandoned in a spasmotic digital dance.

Shapes, forms, text and colours careen, sputter and morph into one another. The animation contains more than 5000 frames. Smith plucks individual frames to create new meaning and recent works. Each manually produced work holds the title of its numerical order in the animation. For instance, frame 5208 inspired the large oil on canvas painting, bcc5208a and so on.

In the context of Initial Public Offering we encounter Smith’s painting practice foremost. The animated source physically and metaphorically plays in the background. Every arrested still from bcc becomes equally reflective as it is refractive. Here I turn to French thinker Roland Barthes who refers to the single frame from a film as “a recalcitrant thing”, something the “scorns logical time.”² Plucked from a sequence of moving images, the single frame is an estranged particle. In this sense, Smith’s paintings have no roots or offshoots. They remain free-standing islands in an ocean of possible interpretations and interconnections.